“I have the pleasure of informing you that you have been awarded the inaugural Margaret Thatcher Award for Outstanding Contribution to CF in the East Midlands.  Congratulations” – Richard Harris, East Midlands CF Regional Chairman 2013 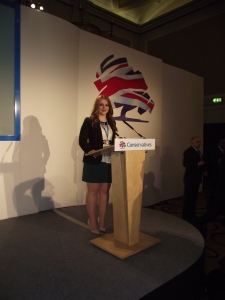 It was a real honour when Richard contacted me to let me know I had been awarded this. The Conservative Party is me, it’s everything that I live for. I have always been a conservative, and I always will be. Some people call that tribalism, I call it passion, determination, loyalty and conviction. Our home is Great Britain and it’s the United Kingdom, and just as the Kingdom is united, we will be united in our fight for a better Britain.

“Those of you in the room who really know me, will know I have never worked for applause or due rewards, purely the love of the cause, my love of the party and the fight to make this country a better place to live. I know that the recipient of this award shares my view and vision.

Sarah Jane may hail from the Eastern Region originally but has been an East Midlands Girl for most of her life. Her CF career began as a branch chairman when she founded the South Holland and the Deepings Branch in deepest darkest Lincolnshire.

I have had the great pleasure of serving alongside Sarah Jane on two separate regional executives, once under Thomas Turrell and once under James Poland. Sarah Jane was appointed as Communications Officer under the Turrell administration in 2011 and served with distinction, not only fulfilling her own portfolio as regional Communications Officer but also never failing to support her fellow executive members however possible.Under James Poland in 2012/13 Sarah Jane was appointed as regional Social Action Officer and combined this role with her new capacity as National Deputy Chairman Membership, which also featured the Social Action portfolio.

Sarah Jane is one of the most committed and hard working party activists that I know, and I know a lot of party activists. Sarah Jane recently told me that the Conservative Party is all that she lives for, a sentiment that is echoed by many of us here today, not least myself. She is the first member of the national executive to answer my calls and texts and is always there to help.

She has crammed so much into her political career, it is hard to believe that she is only 20 years of age. And my word that makes me feel so old.

I mentioned the hard work quote earlier on, Sarah Jane is the embodiment of that quote.It has been an absolute pleasure to work with Sarah Jane over the last few years and my only regret is that I wasn’t able to appoint her to my own regional executive. I know for sure that Conservative Future would not be in the rich state that it is in now without Sarah Jane Sewell.” – Richard Harris, East Midlands CF Regional Chairman 2013, Speaking at the European Youth Conference, October 2013.

Having a browse through recommendations on LinkedIn:

“Sarah-Jane was one of the most committed, hard-working and determined members of my team. Although her portfolio was Communications she was would never shy away from supporting other members of the team, that is a quality that I wish more people had and it is a quality that I know earnt Sarah-Jane the respect and admiration she deserves! She is driven and always has a clear vision of what she wants to achieve and how she will achieve it, meaning she always hits the ground running! I highly recommend Sarah-Jane Sewell.” Thomas Turrell, East Midlands CF Regional Chairman 2010-11 (Posted on LinkedIn November 29, 2011)