I haven’t posted in a while, having been very busy organising events, revising for exams and all of that stuff.

So here’s some of what I’ve been up to… 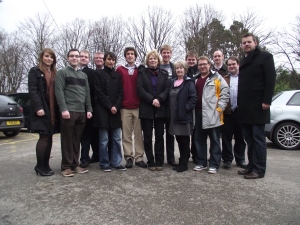 January saw the first National Exec meeting in Nottingham. Prior to this, I along with many others took the street canvassing for votes for a council bi-election. I really enjoyed meeting so many new faces, and catching up with old ones. We were all very busy, joined by Anna Soubry MP, and I can safely say, I really wish I hadn’t worn heels. Overall it was a fantastic day, and I wish the candidate the very best of luck on polling day.

I also joined Lincolnshire Conservative Future for a CPF with Mark Simmonds MP, held in Boston, Lincolnshire. Another successful event. The topic regarded the older generation. A lively debate was certainly triggered between CF and older members, with a touch of banter ping-ponging across the room, everyone also enjoyed ayummy buffet at the Boston Conservative Club. **Note to whoever made the cakes – they were AMAZING!!**

Later on in the month, I was returning officer for the Lincolnshire Area AGM. I have been very proud to serve the area as Secretary and Vice-Chairman Communications for the past year, but I am now retiring from this duty, to serve members nationally. I really wish all of the new executive the best of luck in the coming year. Congratulations go to Mr Thomas Ashton as the new Lincolnshire Area Chairman. Full updates of what is happening, and has happened in Lincolnshire can be found here. The AGM took place at Lincoln University and had the greatest number of members attend the AGM which Lincolnshire has ever seen, a sure testament to the 2011 executives hard work at re-establishing and building the area.

On Saturday 11th, I joined Manchester CF for the Didsbury Dozen, a great night organised by Jamie Williams and Mahyar Tousi.

Wednesday 15th, saw me join the BBC in Salford for a Radio 5 Live and BBC News debate about unemployment. Victoria Derbyshire hosted the show and the Conservative MP was Sam Gyimah.

In the evening, I joined Manchester University Conservative Future for one of their meetings. Spontaneously, I joined a couple of members to attend the universities LGBT society in a Question Time. It was an interesting debate, unfortunately it was stopped half way through by a false fire alarm. Conservatives represented by Sean Anstee of Trafford Council.

Thursday 16th February saw National Conservative Future take Manchester by storm in a highly successful Valentines Masquerade Party. Members from all over the country donned their finery and masks to enjoy a social and networking event. Guests were welcomed with a drinks reception shortly followed by a delicious buffet in central Manchester’s, Bar38.

North West MEP Sajjad Karim kindly attended the event, mingling with everyone and delivering a strong speech, talking about the current challenges we face with the EU, and praised Conservative Future for its efforts, calling for the organisation to have an even stronger voice within the party.

The event, which was the first official national event outside London of the year, as part of the National executives plan to make National Conservative Future events more accessible to all, was thoroughly enjoyed by all members. Facebook and twitter saw many posts; “Great night – thanks for choosing Manchester”, “Had an amazing evening at the National CF Valentines Masquerade Party”. One former member of the National executive even said “this is the best national event I have ever been to, when’s the next one?”.

A massive thank you goes out to everyone who attended and supported this event. Without your support, these events wouldn’t be a success, so thank you!

More photos can be found here.

Please check out the Conservative Future Website and another report on the National CF Valentines Party on Mahyarism.